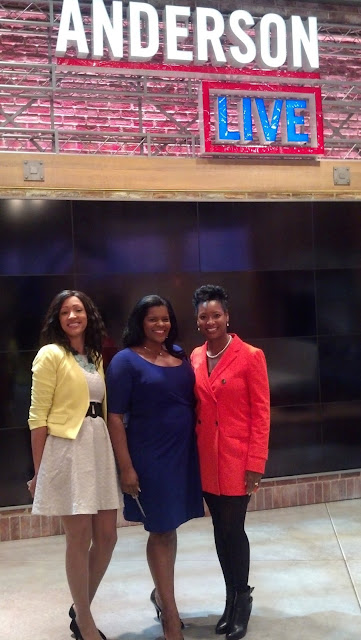 I have been a political junkie for many years.  So I was thrilled when on November 7th, 2012,  I had an opportunity to attend a post-election town hall meeting @AndersonLive located in New York City.  I was seated in the first row with fellow mommy bloggers tweeting catchy phrases or remarks from the audience or hosts.  The studio was full of euphoria because most participants had voted for President Obama.  The co-host in the studio was Deborah Norville because Anderson Cooper was in Washington, D.C. covering the election.  Therefore, he joined us via teleconference along with Meghan McCain who is an outspoken moderate Republican.  She is also the daughter of Senator McCain who ran against President Obama in 2008.  Meghan’s views on social issues depart from her political party's affiliation.

The audience had an opportunity to chat before the live show aired about the election results.  It was interesting to hear the views of the few Republicans who attended the town hall meeting.  Some people expressed that they changed their vote for President Obama at the polling place.  Moreover, a Republican woman recounted her experience at the voting booth.  The woman claimed that she left her home with the intention to vote for the Republican ticket.   But at the voting booth, she reflected on how President Obama had handle Hurricane Sandy.  At the same time, she also recalled Romney’s gaffes with regards to women, and the comment about the forty-seven percent of Americans.  As a whole this women who shall remain nameless, felt that the Republican candidate came across detached from the average American citizen.  Consequently, she couldn't pull the lever to vote for the Romney/Ryan ticket.  Instead, she voted for the POTUS to grant him a landslide re-election victory.
I really enjoyed my visit to the Anderson Live show.  It was certainly a great experience, especially because it was such a historic election in our country.
If you would like to get more information on the Anderson Live show, please visit the website at http://www.andersoncooper.com/
Posted by La Reina Afro-Latina at 12:24 PM No comments: